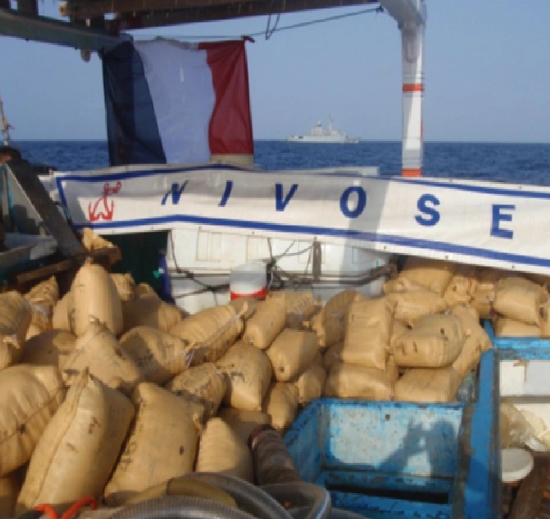 September 25: A French warship, representing Combined Task Force 150 (CTF 150) seized a huge amount of hashish from a rogue dhow on Wednesday 25 September.  The dhow had been tracked for a short period and did not respond to requests from the warship, FS NIVOSE, on her intentions.  Highly trained French sailors, in military rigid inflatable boats, conducted a boarding and in the subsequent search, over 2.5 tonnes of the illegal narcotic was discovered and subsequently destroyed.

Commodore Ed Ahlgren Royal Navy, the Commander of Combined Task Force 150, said, ”This substantial seizure clearly and unequivocally demonstrates the true value and significant impact of CMF operations on those malign actors who choose to use the sea for their unlawful purposes.  The French warship, FS NIVOSE, operating in Direct Support of the joint UK and French CTF 150 Command, has sought tenaciously those who wish to do us harm and incite instability in both this region and further afield.  Thanks to their efforts, they have disrupted a vital flow of funding to nefarious organisations and I congratulate the crew of FS NIVOSE on their success and wish them good hunting for their forthcoming operations.”

CTF 150 is a great example of how the cooperation between international maritime members of the CMF can work together to achieve the common goal of deterring or catching those who risk being a part of illegal narcotics smuggling.