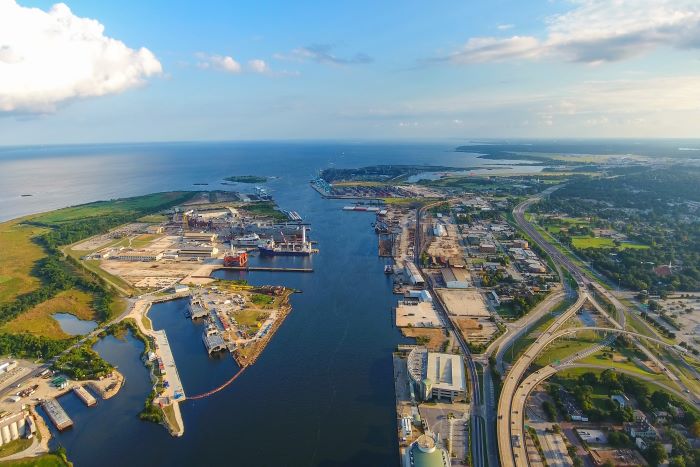 Mobile’s cargo volumes have increased 24.5 percent in the first seven months of this year, to 182,543 loaded TEU, over the same period in 2017. Photo credit: Shutterstock.com.

The opening of two new exit gates at the Port of Mobile in Alabama and longer gate operating hours have helped lower truck turn times by 20 percent to about 40 minutes, even amid pressure from cargo volumes rising by double digits, port officials said.

Trucker turn times had risen to more than 50 minutes earlier this year, in part due to the opening of a Walmart distribution center, said Brian Harold, managing director of APM Terminals Mobile, the port’s only container terminal. But turn times have dropped back down to about 40 minutes — near where they were before the increase — since the opening of the new gates in April. Also helping is an additional gate hour that was implemented in December, Harold said, with gates opening at 6 a.m. CT instead of 7 a.m.

Mobile’s cargo volumes have increased 24.5 percent in the first seven months of this year, to 182,543 loaded TEU, over the same period in 2017, according to PIERS, a sister company of JOC.com within IHS Markit. That easily outpaced the volume growth through all Gulf Coast ports, which rose 13 percent to 1.58 million loaded TEU, the PIERS figures show. Five container services call the APM terminal at Mobile, four to Asia, and one to Europe.

Prior to the opening of the new gates, the terminal’s four exit gates struggled to keep truck lines moving, in large part because the terminal could not do all the necessary documentation for the departing trucks, while the US Customs and Border Protection agency struggled to complete necessary inspections, Harold said.

The addition of a gate hour comes as ports across North America try extending gates in different ways to cope with rising cargo volumes, with varying results. The Ports of Long Beach and Los Angeles have for more than a decade opened gates in the evening and early morning hours, but terminals the Port of New York and New Jersey, while sporadically using extended or weekend gates to handle cargo surges, say there is insufficient demand at present to support permanent gate extensions. The Port of Houston last November ended a program that extended the closing gate time at its Bayport Container Terminal from 7 p.m. to 11 p.m., saying there was insufficient truck volume to make the four additional hours feasible.

APM Mobile takes a flexible approach to gate hours, and will extend them further if business needs dictate, Harold said.

“We do extend our hours into the evening on a case-by-case basis, ordinarily when it’s [at a] specific customer or customers’ request,” he said. “We also do weekend gates to the customer’s request, and that happens relatively often.”

The need for additional operating hours at the end of the day generally depends on how smooth the terminal is operating, Harold said. If all is going well, the end of the day is usually only used by truckers who find they have a bit of extra time and “try to grab an extra move for the day,” he said.

“However, if you have a very congested day, if there were any issues within your operation that caused [it], toward the end of the day it is far more utilized,” he said of extended hours.