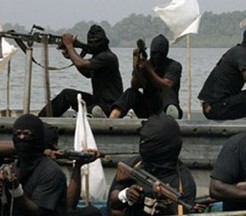 Crew were kidnapped by pirates off Nigeria.

Russian news agencies reported on Sunday that seven Russian sailors and one Ukrainian captured by Nigerian pirates have been released.

General cargo ship BBC Caribbean cargo vessel was attacked on Nigeria’s territorial waters on February 5. The sailors were reportedly released after dialogue was held between the owners of the ship and pirates.