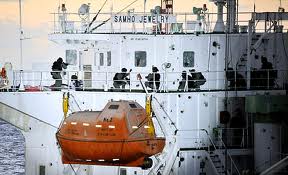 South Korea link up with EUNAVFOR.

South Korea’s Cheonghae Unit will take part in a counter-piracy military operation led by the European Union (EU) for the first time next month, the defense ministry said Tuesday.

The naval unit, currently stationed in the Gulf of Aden between Somalia and Yemen, will partner with EU forces to prevent acts of piracy and armed robbery in the region, the Ministry of National Defense said in a statement.