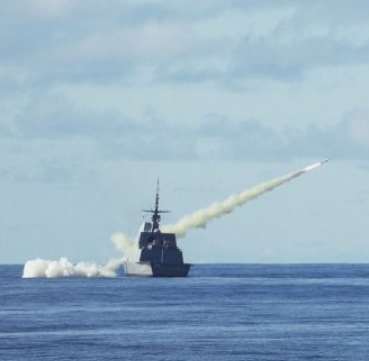 The Republic of Singapore Navy (RSN) and the US Navy (USN) have begun a series of drills that included the first firing of a Naval Strike Missile (NSM) in the Asia Pacific.

The drills, which come under the scope of a biennial RSN-USN activity known as Exercise ‘Pacific Griffin’, began on 24 September in the waters off Guam. The exercise is designed to improve combat interoperability between the two services and was first held in 2017.

The NSM that was fired during the exercise was deployed from the USN’s Independence-variant littoral combat ship, USS Gabrielle Giffords (LCS 10). The missile struck an ex-USN frigate that was formerly in service as USS Ford , located about 170 n miles off the coast of Guam.

The decommissioned ship was also used as a target by the RSN’s Formidable-class frigates, RSS Formidable and RSS Intrepid , both of which fired Harpoon anti-ship missiles at the vessel.

As part of the exercise, Formidable also intercepted a low-observable, high-speed aerial target with an Aster surface-to-air missile, while a Singapore-operated Sikorsky S-70B Seahawk naval helicopter fired a torpedo at a simulated underwater threat.

“The vast training space in the waters off Guam provides the RSN with the opportunity to conduct exercises of substantial scope and complexity, including the conduct of advanced naval warfare with the USN across the full-spectrum of anti-air, anti-surface, and anti-submarine warfare,” said Singapore’s Ministry of Defence (MINDEF) in a media statement on 2 October.