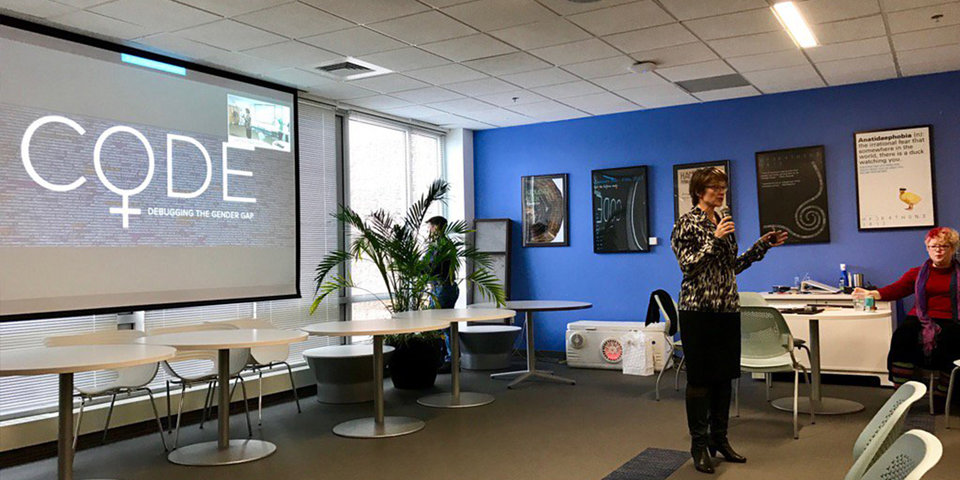 Veracode recently hosted a movie night to watch CODE: Debugging the Gender Gap, followed by a group discussion. Two things struck me at this event:

In our group discussion after the movie – lead by Rosa Carson from Wayfair Labs – we dove into the question of “why is this getting worse?”

As Frost & Sullivan observed last month in its 2017 Global Information Security Workforce Study: Women in Cybersecurity (sponsored in part by Veracode), women still only make up 11 percent of the cybersecurity workforce. Cybersecurity may be worse off than the tech industry as a whole, but not by much. According to the GitHub project Women in Software ENG, women make up only 19 percent of software development teams.

It wasn’t always this way: In the early days, computer science was dominated by women. In fact, the creator of the first software language was Ada Lovelace – for whom the language ADA and the Veracode conference room “Lovelace” is named after. (We named all our new conference rooms after women in STEM in order to reinforce the role women have played and will continue to play in innovation.) Why was computer science dominated by women early on? One factor was that this industry was accessible to women before working outside the home was generally accepted. In the 80s, women represented nearly 40 percent of the computer science[i] industry. But this all changed in the 90s and today where women make up barely a fraction of software developers and even fewer leaders/founders/board members. Why did this happen? What do we do to fix it?

The answers to those questions are intertwined. On factor is that, beginning in the late 80s and early 90s, STEM toys were increasingly marketed to boys, while dolls and artistic toys were targeted to girls. This marketing shift was primarily financially-driven and simply based on assumptions about what children would like. The problem is that, although male and female brains have the same inherent capacity for growth and learning, all mammals learn through experiences. In childhood, many of these experiences are created through play.

But missing that early childhood encouragement and experiences isn’t the only deterrent for women in technology. The industry itself isn’t very friendly or encouraging with the advent of the “brogrammer/computer cowboy/hero complex.” This persona celebrates the very masculine archetype of the ambitious man who alone is able to deliver results and save the day. My colleagues and I have certainly observed this behavior – not just in coders but in all technology roles. This isn’t appealing to women who tend to work more collaboratively and also tend to be punished socially for being too assertive, vocal or aggressive.

Good people can have bad habits.

Even at companies prioritizing and cultivating gender diversity, habits, perceptions and stereotypes can be insidious, persisting even for the most vigilant. I have heard comments from women that they would never want to work for a female boss, because female bosses micro-manage. It’s disappointing to hear, and makes me think of former Secretary of State Madeleine Albright’s quip, “There's a special place in hell for women who don't help each other.”

Hell seems a bit aggressive. Good people can have bad habits, bad thought patterns and bad experiences that reinforce the wrong behaviors. Therefore, we have to consistently fight against this, even when we feel lazy. During Veracode’s latest Hackathon, we specifically encouraged group hacks and team hacks to fight against the celebration of the lone developer. This is one small step, but adding up small steps is the only way to get anywhere.

We must be impatient. We cannot wait.

My favorite line from CODE was delivered by Marc from Etsy: “Real substantial change in the industry has to come from there being women in leadership. You have to be impatient, this has to happen now we have to do what we can now, whatever it takes to move the number, we have to do that now”.

He is right. We can’t just wait for someone to place a tiara on every aspiring female leader. If we wait for a system-wide update that better accommodates two genders in the workforce, we are wasting valuable economic capacity. More companies need to recognize the value of gender diversity to the bottom line.

Some companies – I am proud to say Veracode is one of them – are listening. As a newly minted part of CA Technologies, we look forward to having an even larger impact on this issue and on those numbers.

Want to join the effort? We are hiring!