On Wednesday afternoon, an Iranian ammunition depot in Al-Bukamal, Syria was hit by an airstrike. This attack comes after Israel reportedly conducted four air strikes in Syria between November 12 and November 20, according to the Russian Foreign Ministry. While Israel has reportedly carried out thousands of strikes in Syria and neighboring Iraq in recent…

“We have been at war now for almost 20 years, and you are starting to see what that is doing to our forces,” he said.

In a recent episode of HBO’s TV show, Silicon Valley, Pied Piper network engineer Bertram Gilfoyle (played by actor Martin Starr), creates a chatbot he calls “Son of Anton,” which interacts on the company network with other employees automatically, posing as Gilfoyle. For a while, Pied Piper developer Dinesh Chugtai (played by Kumail Nanjiani) chats with the bot until during one interaction he sees Gilfoyle standing nearby, away from his…

The European Union Intellectual Property Office (EUIPO) has released a new study which suggests that piracy is dropping in Europe. While the research is limited to site-based piracy, it has some interesting findings. Countries with a lower average income per person visit pirate sites more often, for example. In addition, the study shows that awareness of legal options doesn’t always decrease piracy. Source: www.slashdot.org 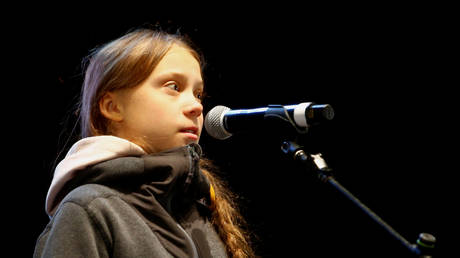 After more than a year of school strikes, climate marches and high-profile speeches, Swedish climate activist Greta Thunberg told supporters that her movement hasn’t achieved any actual change and she doesn’t want to continue.
Read Full Article at RT.com

Gunmen in cars opened fire on Friday in Baghdad’s Khilani Square leaving at least 15 people dead and 60 wounded, Iraqi security and medical officials said. At least two of the dead were policemen. Protesters fearing for their lives ran from the plaza to nearby Tahrir Square and mosques to take cover. It wasn’t immediately clear who did the shooting. The attack came as anti-government demonstrators occupied parts of Jumhuriya, Sinak and Ahar bridges in a standoff with security forces. All the bridges lead to or near the heavily-fortified Green Zone, the seat of Iraq’s government. “We are under live fire now with electric power cut, the wounded and martyrs are here and the bullets were fired in Sinak Bridge,” said one protester, who did not give their name for fear of retaliation. The attack came a day after a string of suspicious stabbing incidents targeting demonstrators left at least 13 wounded in Baghdad’s Tahrir Square, the epicenter of Iraq’s leaderless protest movement. Those attacks by unknown perpetrators occurred as demonstrators supporting political parties and Iran-backed militias withdrew from the Square . The incidents on Thursday fueled paranoia among protesters, who immediately implemented self security measures to uncover saboteurs within the square. At least 400 people have died since the leaderless uprising shook Iraq on October 1, with thousands of Iraqis taking to the streets in Baghdad and the predominantly Shiite southern Iraq decrying corruption, poor services, lack of jobs and calling for an end to the political system that was imposed after the 2003 U.S. invasion. Security forces dispersed crowds with live fire, tear gas and sonic bombs, leading to fatalities. Pressure from the protests, now in its third month, lead to the resignation of Prime Minister Adil Abdul-Mahdi last week following Grand Ayatollah Ali al-Sistani’s calls for parliament to withdraw its support for his government. Earlier on Friday, Iraq’s highest Shiite religious authority called for the formation of a new government within the allotted deadline, and without foreign interference, as the clock ticks down on lawmakers to select a new premier. Thousands of anti-government protesters from across southern Iraq had joined demonstrators in Tahrir Square, the epicenter of the protest movement in the capital, hours after the sermon, according to security officials. “We hope the head of the new government and it’s members are chosen within the constitutional deadline and according to the aspirations of the people and away from outside influence,” the Grand Ayatollah said in his weekly Friday sermon in the holy city of Najaf. The sermon is always delivered by a representative. He added that the Shiite religious establishment would not take part in the government formation process. Parliament had 15 days since his stepping down was formally recognized by lawmakers last Sunday to name a new nominee, per the constitution. Since the US invasion of 2003, government formation in Iraq has been based on brokering consensus among political factions and their foreign allies, primarily the U.S. and Iran. President Barham Salih launched talks immediately after Abdul-Mahdi’s resignation by making rounds with different political blocs. Iranian General Qassim Soleimani, the head of Iran’s elite Quds Force and the architect of its regional security apparatus, also came to Baghdad to meet with key officials. Lawmakers made headway in passing a key reform bill to change the membership of Iraq’s controversial Independent High Electoral Commission, the body tasked with overseeing polls, in a session Thursday night. Anti-government protesters consider IHEC a corrupt and partisan institution and its commissioners working in favor of political parties. The new law seeks to select commissioners primarily from the judiciary. Protesters are also calling for early elections and reforms to have a greater influence in electing their representatives. Al-Sistani, Iraq’s most powerful religious figure whose opinion holds sway over Iraqis, also said peaceful protesters should increase their ranks and push out saboteurs, while respecting the role of the “indispensable” security forces. Following the sermon, thousands of protesters traveled to Baghdad from across southern Iraqi provinces and marched on Tahrir Square, including from Dhi Qar, Diwanieh, Karbala, Najaf, Babylon and Missan, security officials said, chanting the slogan “Sistani, we are his soldiers.” Security officials requested anonymity in line with regulations.

Hacks linked to Ocean Lotus (APT32), a group believed to operate with orders from the Vietnamese government.

Image: Pablo Martinez German media is reporting that hackers suspected to have ties to the Vietnamese government have breached the networks of two car manufacturers, namely BMW and Hyundai. The report, coming from Bayerischer Rundfunk (BR) and Taggesschau (TS), claims that hackers breached the network of a BMW branch sometime this spring. The attackers allegedly installed a penetration testing toolkit named Cobalt Strike on infected hosts, which they used as…